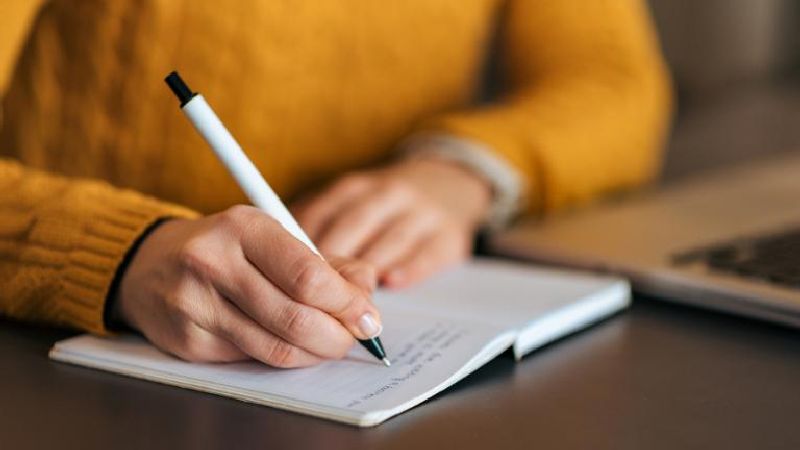 It was a beautiful Monday morning. I decided to skip my math class, even though my teacher said that if I skip another lesson, I'll fail math. I thought it would be a good idea to go for a walk through our small city. Suddenly, I’ve stumbled against a gorgeous statue. It was a sculpture of a man holding a shield with a sword risen to the sky. Some people say that this man was a soldier who died defending his lover, and whoever touches it will soon find their soulmate. I didn’t believe in that. I took the opportunity and I took a picture with the statue, trying to hold his hand that he rose. Little did I know that this story was true. As soon as I took the picture, I saw a bright light coming from the place that I’ve touched. Not even a second later, I felt someone falling on me. I caught him and I opened my eyes. I saw a tall and handsome young man. I suppose that he was around my age. We both stared at each other in disbelief for a solid minute. Honestly, I wasn't complaining. His eyes were chocolate brown with a little tint of green in them. The longer I've stared at him, the more features I've noticed; his light freckles, his two moles, one under his lower lip and the other right next to his left eye, his thin, pink lips, his short brows, that were almost like two dots on his forehead and how small and narrow his eyes were. Even though he was a little calmer by now, I could sense that he was startled. I tried to start a conversation, but when I opened my mouth and expected the words to come out, what I heard was barely considered gibberish. He looked at me with visible confusion. Then, I realized that I'm still holding him in my arms. I've let him go and we stood there for a while. It took me a moment to notice how he looked in all of his glory. He wore a black sweatshirt with a white print that said "Made in China", a pair of navy blue jeans and red Converse trainers. Honestly, I liked how that sweatshirt looked on him. It was oversized and it looked good with his skinny jeans. Judging by how thin his legs were, I could tell that he was very skinny and didn't have any muscles.After a while, I've realized that he's looking at me and I'm staring at his legs. I pretended that I was staring at a fountain that was behind him, but I don't think he caught that bait. As soon as he looked away, I started to examine his hair. It was dark brown, reached his shoulders, and was tied up with a red ribbon in a very low ponytail. He left his bangs and sideburns untied.His bangs were split in half and settled down behind his ears. His sideburns, on the otherhand, were settled down behind his bangs. Even though I've already known how he looked like, I wanted to know what he was like. I came up to him and introduced myself.-Hello! My name is Yuki- I said sticking my hand out to greet him. It was the first time that I've had to use Chinese while speaking to someone else than my teacher.-Hi, uhh... I'm Lien- he responded and shook my hand. Even though he tried to play it cool, I could see that he was shocked that I could speak Chinese so fluently, even though I was European. Lien’s voice was soft and soothing. I felt like I could fall asleep by just listening to his voice. Even though he was talking quietly, I could hear him almost perfectly and the town was pretty busy since it was around 9 AM and the shops just started opening their door for the customers. I sat next to the fountain that was placed in the middle of the market. Lien followed me and took a seat beside me. We were watching people go by, rushing to the new bakery that was opened a few days ago. I decided to wait a while and get us some tasty sweetbuns with chocolate filling. As I’ve entered the shop, I saw a familiar face working there. I came up to the counter to greet him.

-Elli! Hi! - I said in a high pitched voice. I was really excited, I didn’t see him since middleschool and now he just showed up in my town without a word, pretending that nothing happened.- Hey, Yuki - he replied with a smirk on his face - What can I get for ya?- Can you give me two chocolate-filled sweet buns?- Sure. That would cost... One kiss - Elli said, leaning in. I pulled one of Hershey's kisses out of my pocket and put it on the counter.- Sorry, but that's the only kind of kiss you'll ever get from me - we both laughed and he gave me the buns.Elli is a nice guy. Even though he’s a little bit sassy and chaotic, he’s always helpful and he gives the best advice. He looks pretty similar to Lien, too. The only differences are that his bangs are shorter and moved to the side, he always wears a man bun and he has a goatee.Their styles are different too. Elli dresses like a typical bisexual guy; Timberlands, cuffed jeans, white T-shirt, and a flannel shirt on top, while Lien has more like a typical Asian streetstyle. Elli also has an undercut and his hair is way shorter than Lien’s. As I said earlier, Elli is a very chaotic person. In one second he can be calm and quiet, and then suddenly he’s like“hey, let’s rob a bank, buy bombs or dynamites and blow something up!”. He was in a few dangerous situations because of this. I left the bakery with two tasty buns. I gave one to Lien. He smiled softly at me and we both started eating while walking to my next class.-I’m sorry it took me so long to get these buns. I met an old friend of mine.

-It’s okay, I understand. It was Elli, right?-Yeah...Wait, you know him?-Yup. He caused a lot of trouble in my hometown. Well, not only in my hometown. That’s why Chinese mafia is looking for him, so be careful, if youngo out with him.I was shocked. I knew Elli was a very troublesome person, but I had no idea that he would go this far. I was about to ask what he did, I saw that Lien didn’t want to talk about it, so I just kept my mouth shut. We were walking in complete silence. When we finally reached my school, I saw a bunch of Asian men dressed in black suits. Lien hid me behind him as we approached the building. As we approached the front door, these men surrounded us. Lien tried to fight back and protect me. Even though he seemed like he's weak, he actually knocked out one of them. I think that he focused too much on fighting with that one guy that he didn’t notice that one of them started dragging me into their van. I started screaming.Lien finally noticed me and tried to rush us, but these guys caught him. Lien started calling my name really loud until he saw us getting into the van. I was probably supposed to be a bait for Elli. When I looked through the window, I saw Lien chasing the car. Even though I was tied up, I managed to throw a piece of paper out of the window. It had my phone number on it. I always carry extra print outs of my number just in case. Lien picked it up and ran towards the bakery where Elli was working. When he reached his destination, Elli just finished his shift and was ready to go home, when he noticed Lien running towards him.-Hey, what’s up, dude?- Elli greeted him. Then, he noticed Lien's bruises and blood running from his nose. -Oh God, what happened?-Lien was out of breath. It took him a while to calm down and stop his tears.-The...the mafia...they...they kidnapped Yuki- Lien whispered. He felt miserable. Even though he knew Yuki for less than a day, she was his soulmate after all. His lips were trembling, as he tried to stop his tears, but he couldn’t resist it. She was the only person that accepted him. She was his only friend. Even his family hated him. No one knows what happened between him and his parents. He swore to himself that he’ll never tell anyone about this. Just thinking about it made him feel even worse.- It's going to be okay, we will find her. For now, we need to take care of your bruises…